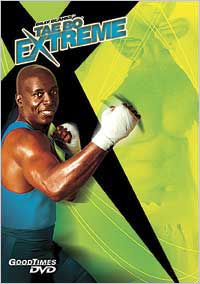 Tae Bo Extreme is a 56 minute cardio + strength  kickboxing/step workout. 4 minute warm up, 48 minute training time and 3:30 minute cool down. To be honest, I hesitate to label it as having strength work, but I have to remember that there are all kinds of strength work and just because it is not the type of strength work I prefer, doesn’t mean it doesn’t count.

Tae Bo Extreme is a mixed bag. I’m not sure labeling it as “Extreme” is appropriate, but it is definitely different. It also had so much potential to be a regular in my rotation—until the halfway point that is—that in the end, it was a disappointment for me. I have to stress that this is a personal opinion. It is a good enough workout, that it might be the perfect mix for someone else.

Billy Blanks was in high form in this workout. He was very motivating and energetic. He’s always pretty energetic, but in this workout we got a good bit of singing and dancing, too! He has on some weird shorts that he kept messing with. I saw this mentioned in other reviews—now I see why it was noted! He messes with them rather obsessively. And they are ugly, too, btw. Not that it matters, but they are. Billy’s cueing, as usual, was off. More sets on one side than the other. Sometimes he completely forgets to work the other side of the body. But that is signature Billy Blanks. You have to expect that kind of thing when you do a Tae Bo workout.

For this workout you need a step and some light weights. I used an 8 inch step, 3 pound weights and I also wore my weighted gloves. On to the workout.

The warm up was very low key so that when he stretched you out at the end of the warm up, it didn’t feel right. I like to be a bit more warm before I stretch my muscles and they really weren’t warm at all. After the warm up, you do typical Tae Bo kick/punch/aerobic moves on the floor for 12 minutes. Then you move to the step for the next 13 minutes. Your heart is already pumping pretty good, but at this point, it jumps. I was loving it! The moves with the step were great and flowed well. Doing Tae Bo with a step was very cool. At this point, the “Extreme” title fit. But then, halfway through, the intensity drops as we go to “strength” work.

For the strength work, it appeared that the exercisers were using one pound weights. I won’t insult this because Billy did a lot of reps—half of them double time—so you really can’t go heavy and maintain form. I would call it an endurance strength workout. Nevertheless, it killed the “extreme” cardio. I will admit that he covers a lot of muscle groups and he even threw in a few cardio bursts so that the heart rate didn’t drop to nothing. Still, strength work is not why I do Tae Bo. I do it for cardio, so for me, at this point, a workout that had so much potential just fizzled out. If you are into this type of strength workout, then I think this could be the workout for you. It wasn’t easy. It wasn’t advanced either (or “extreme”), but it was decent toning. The two cardio bursts during the strength work are jumping jacks with the hand weights and the other was straddle downs on the step. In addition, he frequently takes the strength moves up to double time—which is another reason (in addition to a bazillion reps) why you have to go light on the hand weights. These are the reason that, even during the strength part of the workout, your heart rate stays in the aerobic zone (low aerobic zone)—but definitely nothing “extreme.”

One last note, there were some points during the first half (the cardio half) where Billy had you do a move slowly to learn it before doing the move double time; once or twice he had you do the move slowly for what I felt was too long. He could have pushed it to double time sooner. But other than that, I loved the cardio portion.

Overall, this workout was a mixed bag. I loved the first half but the second half was a disappointment. However, someone else’s opinion would depend on what they were looking for in a workout. It could be the perfect workout for someone else.