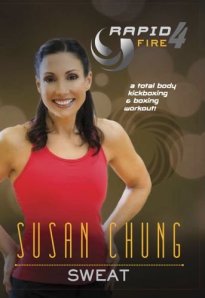 Rapid Fire 4: Sweat is Susan Chung‘s most recent kickboxing workout and it is the second Rapid Fire workout I have bought. I really like Susan Chung and her kickboxing workouts. I honestly don’t know which I like better–this one or Rapid Fire 3. I love them both! Rapid Fire 4 is similar to Rapid Fire 3 but also different. The format is the same: kickboxing/boxing combos followed by blasts. They are high steady state cardio. The difference is that there is no strength training in Rapid Fire 4 and yet it is a longer workout. So you get a lot of cardio! Which I do love. However, you also don’t get the tabata segment like you did in RF 3.

Rapid Fire 4: Sweat is 72:30 minutes long; 6 minute warm up, 25 minutes kickboxing combos and blasts, 23 minutes boxing combos and blasts, 10:30 minutes core and 6 minute stretch. Susan and crew used weighted gloves except for the modifier who used no gloves and did no jumping. I used 2 pound weighted gloves. I felt there was a bit more of a learning curve to this workout than in Rapid Fire 3. She still moves pretty quickly, but she taught some combos slowly then sped them up. Everything is layered before putting each combo together. Then you do your blast which is usually a shorter/faster combo that is higher impact. Then you repeat the whole thing on the other side of the body–including the blast. The same thing goes for the boxing combos, except there is no kicking involved. The blasts are a little different than they were in the kickboxing combos, but no less fun–the first one has squat thrusts and plank jacks! Next you move on to core work. I didn’t like this core work as much as I liked the core work in Rapid Fire 3 and in the future I will probably skip it in order to keep the workout at 62 minutes. The format for the core is two exercises that work the upper abs, two that work the lower abs and two that work the obliques. Then at the end she has a “core challenge” which is just 3 more core exercises, but they are no more challenging then the 6 that came before them. For the core work you use light dumbbells for some of the exercises. The work ends with a nice stretch that focuses on the lower body.

Before I list the premixes, I will note I am really interested in the one called “Susan’s Favorite Mix.” It looks like a fun way to mix it up, and I would just do as I mentioned above–skip the core work to keep the workout at about an hour.

All premixes have warm up and stretch