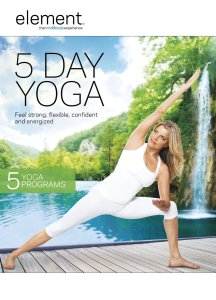 5 Day Yoga is yet another offering from Element that I sampled via the library. I liked the idea of a different yoga practice every day of the week and I like the way it is delivered even more. It has one of those menus where you can build your own yoga workout. First the basics: there are 5 yoga workouts ranging in time from 14:30 minutes to 17:30 minutes long. There is also a 2 minute “warm up” and a 6:30 minute “cool down” that is automatically attached to everything you build–whether you chose to do one workout or all 5. So a 14:30 minute yoga workout is actually 23 minutes long; do all 5 and it is an 89 minute yoga workout. You can stack them for a workout of just about any length you want and you can arrange them in any order you like. Pretty cool! When I initially did these workouts I did them as single short workouts and I utilized them as doubles workouts after work. However, in the future I will stack them, creating a slightly longer workout (stacking 2) for my doubles workouts, or stacking 3-4 for my Sunday yoga workout. And obviously by stating “in the future” this indicates I like the workout enough to purchase it.

This workout is led by Ashley Turner who is a yoga instructor and holds a masters degree in counseling. I love this yoga instructor. I have checked out all of her Element yoga workouts from the library and loved them all so much I have purchased them. In addition, I also purchased the one Element workout by Ashley that my library does not carry–Element: Weight Loss Yoga. It has already arrived so that review will be going up soon. I really love the yoga workouts Ashley creates and how she leads them. There is something soothing about her voice, the things she says and even the way she looks. She has made yoga something I now look forward to and crave.

The 2 minute warm up is just deep breathing while sitting cross-leg. For the 6:30 minute cool down you will sit down and hug the knees into the chest, then do a seated forward fold. You will do approx 3 minutes of corpse pose then end sitting cross-leg with eyes closed for another 1:30 minute.

Strength & Stamina is 15 minutes long. As the title suggests, you will be exerting yourself during this workout and building strength via isometric yoga poses. You start by going through a basic sun salutation series 3 times–raise arms overhead, swan dive down to forward fold, lower to plank, cobra (or up dog if you choose), down dog, return to forward fold and stand. On the 3rd and final sun salutation, end in down dog and raise right leg to 3 leg down dog then into crescent. While in crescent you will do “fists of fire”; to do this, while in crescent, lower back knee (left leg) almost to ground, while bringing fists to hips. Alternate crescent w/ fists of fire. Warrior 3. Standing splits. Half moon pose. Forward fold. Chair pose. Warrior 2. Half moon, standing splits, crescent/fists of fire and warrior 3 on other leg. Chair pose series in which you lower chest to thighs while bringing arms behind you, then bring arms overhead and while raising chest and also raising up on your toes (but you are still in chair pose); alternate these two poses. Forward fold. Wide plie squats.

Energy & Flexibility is 15 minutes long. This is a very nice range of motion and flexibility yoga workout that focuses on the hips. I really felt it and I really enjoyed it. It opened my hips and stretched them deeply. It starts with a swan dive into forward fold to plank. Drop to knees and do cat & cow. While on all 4s, rotate the hips, using your whole torso and spine. Next you will do bird dog pose, bringing elbow in to opposite knee beneath you and then pushing them back out straight to bird dog. Down dog. While in down dog, raise onto toes, then turn the toes and knees toward the right and drop your bottom toward the heels; alternate sides. Three leg down dog; while in this position, bend and straighten raised leg. Rotate raised leg/hip, bending knee and returning to straight 3 leg down dog position. Bring raised leg through so that you are in a deep lunge with back knee on the ground. Do giant back strokes with arms. Raise arms overhead into modified crescent (knee stays on the ground) and hold. Place hands on floor on either side of front foot, straighten knee and lean over the front leg in half splits. Bend front leg again, bring both hands to inside of foot and move foot out to side of mat, turning toes and knee out to 45 degree angle and drop down to forearms (this felt so good). Return to down dog and repeat on other leg, starting with 3 leg dog. Sit cross-legged, with ankles and heels aligned (ankle sits right on top of one knee and other ankle directly below other knee); this is fire log pose. In this pose, reach torso and arms forward, stretching hips. Come to forward fold and roll back to standing.

Core Power is 17:30 minutes long. I like this workout more than I thought I would. I am not a huge fan of core work tho I do it because I know it is necessary and important, but this was more than traditional ab work. You do ab work that is effective but not horribly challenging, but also a lot of spine work which I do like a lot. So this was much more relaxing than I expected for a core workout. You start in chair pose. Forward fold. Plank, then sit on floor, hugging knees into chest, and rocking body backwards and forwards. Then lay on back and twist knees to side, stretching spine. Raise knees/feet and put hands behind head. You will do bicycles, but hold for the count of 4 each time you bring your elbow to opposite knee. Next you will bicycle faster, except rather than bringing opposite elbow to knee, you will reach opposite arm past knee. Raise legs straight into air, hands behind head; lift and lower tailbone. Bend knees and place hands on knees; roll knees/hips around. Put feet on ground, hands behind head again; raise one foot a few inches off the ground while twisting opposite elbow toward it, hold torso while extending leg straight (still only a few inches off the ground) then bring the knee in and up, reaching opposite elbow even more towards it then lower foot and torso–alternate sides. Lay on stomach, tops of feet flat and torso raised onto elbows and palms; stretch spine in this position. Cat and cow. Stay on hands and knees and reach one arm to side and to ceiling, then beneath you into thread the needle. Down dog. Return to all 4s, round back, then lower chest and chin to ground while butt stays raised (8 parts bowing), press up and back into child’s pose then into down dog. Raise one leg while in down dog then step through into runners lunge; bring opposite arm to outside of front leg and twist into twisting crescent pose. Come into triangle then twist into revolved triangle. Wide leg forward fold.

Stretch & Restore is 17 minutes. I really liked this workout. She works your spine very nicely and I like how it starts with standing poses and ends laying on the mat. Some of the poses were pretty strenuous and challenging for me–especially the bow pose when you’re rocking and rolling to your side. I’m not quite ready for that yet; I attempted it but then just held bow for a long time. I’ll work up to it! Start with swan dive to forward fold. Plank then get on all 4s and do cat & cow. You will transition into a salute pose (or 8 parts bowing) where your knee, chest and chin are on the ground, butt in air. Child’s pose. Down dog. Plank to cobra or upward facing dog. Down dog. Forward fold and stand. Swan dive to forward fold. Plank. Cobra. Lay on stomach with tops of feet flat on ground and arms at side with palms pressed into ground, lifting the chest; hold for a while then lift the legs and hold longer. Child’s pose. While in child’s pose, grab your heels and press the top of your head into the ground, tucking the chin into chest and pushing bottom into air for rabbit pose. Cat & cow. Hold pointer dog pose; while in pointer, reach the raised arm back and grab the ankle of the raised leg. Child’s pose. Down dog. Chair pose. Dancer’s pose. Swam dive to forward fold. Plank. Cobra. Superman pose. Bow pose. Rock in bow pose, then roll to each side and hold. Child’s pose. Butterfly while leaning over, feet to forehead.

Stress Relief & Meditation is 17 minutes. This workout was not nearly as relaxing as I expected it to be. In fact, it “stretched” the shoulders near to straining them… or so it seemed to me. I do think my shoulders need more attention so that is not necessarily a bad thing–it just did not relieve my stress. At least not the first time I did it. Perhaps after doing it repeatedly and combining it with some of the other workouts (and not ending with this one!), I will feel more relaxed at the end. The workout starts with a forward fold series that you hold for a long time.  You stay this way for a while, just hanging and relaxing, then you interlace your fingers behind you and reach them up and overhead. Roll up to standing. Circle the arms wide and when they come to the front of the body, round the back. Chair pose. Interlace fingers behind you again and fold forward, stretching the laced fingers/arms straight up overhead. Plank position. Lower to stomach. Then you will be doing some weird stuff with your shoulders and feet, circling the shoulders while laying on your stomach (this was not relaxing). Do backstroke arms. Interlace fingers behind the back again and stretch. Cobra. Down dog. Dolphin. Down dog, up dog, down dog. Runners lunge to crescent. Bring one arm down to floor and reach same side arm as forward leg to sky; alternate wrapping that arm beneath leg and reaching to sky. Warrior 1. While in warrior straighten legs and bring them a little closer together (pyramid stance). Raise one arm overhead and start with a basic tricep stretch; then bring other arm behind you so your arms are clasped behind back (she suggests using a towel or belt if you need to–I needed to). Bend forward with hands still clasped (they will be clasped like this a long time), your legs still in pyramid. Stand up (hands still clasped in tricep stretch) and do forward fold. Switch arms (still doing the tricep stretch but now with other arm is high, but both hands are clasped behind back–or holding towel/belt) and forward fold again. Transition legs to pyramid stance (hands still clasped). Release hands and come to runners lunge. Reach same side arm as forward leg to sky; alternate wrapping that arm beneath leg and reaching to sky. Lower to floor and do cobra. Down dog. Sit cross-leg. The final 3:30 minutes is “breath meditation” in which she has you inhale for a slow count of 4 and exhale to a slow count of four. You do this several times.

One thought on “Element: 5 Day Yoga”