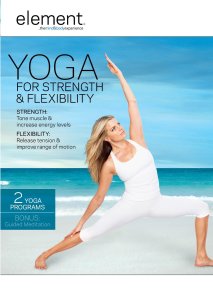 I am so enamored of Element‘s workouts that I can’t stop checking them out at the library to sample them (and then purchasing the ones I love). The workouts are beautifully produced. All of the ones I’ve done are set in the same location–a beautiful green, vibrant garden beside the Pacific Ocean. They play relaxing music and the workouts are done voice over. The voice overs are very well done and well-cued.

This workout is led by Ashley Turner who is a yoga instructor and holds a masters degree in psychology/counseling. I am particularly interested in this instructor because I checked out 3 other Element yoga workouts from the library in addition to this one and she leads all 4 of them. Now that I have done Yoga for Strength & Flexibility, I can see why Element keeps using Ashley! I loved these workouts. Ashley cues well, but I also found her somehow relaxing, even when I was very challenged by a pose. Maybe it is her psychology background, but she has a very calming effect on me. I have 4 Element Yoga collections led by her currently checked out from the library, so they will be posting at some point this month.

This DVD contains two approximately 30 minute yoga workouts: Yoga for Strength and Yoga for Flexibility plus a 7 minute guided mediation. For the guided meditation you will just sit cross-leg with eyes closed while she talks you through it. The first time I did this workout I did everything in one sitting–Yoga for Strength followed by Yoga for Flexibility and ending with the bonus meditation. I felt so good at the end of this long yoga workout I cannot even explain it. My body felt as if she had worked it hard (but not too hard), stretched it out thoroughly, then brought me down, relaxing and calming me. I adore these workouts! They are not beginner workouts but I don’t think they are advanced either–so intermediate level.

Yoga for Strength is 33:30 minutes long. This was a strenuous yoga workout–I broke a sweat during it! But she brings you down nicely at the end so you are relaxed when it’s over. It starts with deep breathing then neck rolls. Forward fold. Plank position. Side plank. Cobra. Down dog. Next you do some core work. Lay on your back, hands behind head, ankles crossed, knees slightly bent and legs raised to ceiling; raise hips and shoulders. Keep your legs in the same position but reach one arm toward and past opposite knee; alternate sides. Straighten and uncross ankles (still raised toward ceiling); lower one leg a few inches from ground and reach one arm toward and past opposite knee; alternate sides. End core series by rolling up into standing forward fold. While in forward fold, lace fingers behind back and raise to ceiling. Return to plank and do tricep push ups. Cobra. Down dog. Raise one leg into three legged dog then bring foot between hands; with chest resting close to forward leg, raise straight arms behind you then come up into crescent; alternate these two positions. Next alternate crescent with straightening front leg and bring hands down beside hips. Lace fingers together, lower back knee about 2 inches from floor and round back, pressing laced fingers in front of you. Warrior 3. Standing splits. Chair pose with alternating arm positions. Forward fold. Plank. Cobra. Down dog. Repeat series from 3 legged dog on other side of body, ending with chair pose, except in this chair pose series she comes up on her toes. Forward fold. Plank. Cobra. Down dog. 3 legged dog to Warrior 2. Right angle. Warrior 2 and right angle on other side. Lay stomach and do cobra. Bow pose. Boat pose. Alternate lowering body from banana and returning to boat. Bridge pose. Wheel. Spine twist. Corpse pose. End in cross-leg pose.

Yoga for Flexibility is 31:30 minutes long. This was not an easy workout but I didn’t break a sweat like I did in Yoga for Strength. But it did challenge me and stretch me deeply. It starts with deep breathing then neck rolls. Circle arms wide as if in backstroke; reverse as if doing “giant butterfly stroke.” Interlace fingers overhead and do side stretches. Keep interlaced fingers/arms overhead and stretch/arch back backward. Next you will do deep wide leg plie squat stretches and alternate standing and squatting. Forward fold. Roll halfway up then round and arch spine. Remain partially bent over with hands on knees and circle hips. Straighten and do “horizontal butterfly stroke” (opening arms wide, then hugging arms around body). Forward fold to down dog. Lower knees so you are on all 4s. Raise one arm to ceiling, turning shoulder/chest to sky then bring arm underneath you into thread the needle; alternate these two poses, ending by holding thread the needle. Cat and cow. Bring one knee in to forehead then push leg out straight behind you. Circle leg/hip hydrant style. Repeat on other side starting with circling leg/hip hydrant style, bringing knee to forehead and pushing leg out behind you and ending with the thread the need series. Bring one leg between hands into runners lunge. Straighten legs into pyramid pose. Triangle pose. Triangle then pyramid on other side of body. Stand with legs wide and torso bent over, hands on floor. Bend one leg, dropping hip toward floor; you hold this deep stretch for a long time. Straighten legs and do spinal twists, reaching one hand to the sky. Do the bent leg stretch on other side of body. Straighten both legs again and try to move feet out even farther so you are in an even deeper wide leg forward fold. Lower torso as low as possible, placing forearms on floor if you can. Sit on bottom with right leg stretched out straight to side and the left leg bent, heel to crotch. Reach left arm out wide to side, stretching chest then reach arm toward right side/toe, still opening left side of chest/body toward sky. Straighten torso. Keeping legs in basically the same position you will turn your torso toward the right (straight) leg and lean torso over leg, reaching for foot. Repeat on other leg. Ends with corpse pose followed by cross-leg pose.