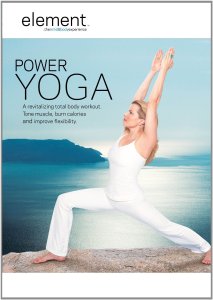 Power Yoga is another excellent yoga workout by Element and Ashley Turner. I’ve done quite a few Element and Ashley Turner yoga workouts over the past few weeks and this one is the most advanced and challenging of the ones I’ve done so far. I wouldn’t say it was advanced, but maybe high-intermediate. I worked up a sweat during it and was definitely challenged. None of the moves were difficult to do, it was just the combination of challenging poses held for several breathes. Several times my muscles were trembling and during the core work my abs were ready to quit sometimes! Ashley does always show modifications to make this workout easier and sometimes more advanced variations. Overall, an excellent workout and a nice alternative to her more relaxing yoga workouts. She does bring you down and stretch you out at the end like she does in all of her other yoga workouts, so you are still very relaxed by the end of the workout.

Ashley is a yoga instructor and holds a masters degree in psychology/counseling. As always, she brings her calming presence to every workout of hers I have done so far. And like all of the Element workouts I have done, this one is set in a beautiful garden with a reflecting pond nearby, flowering bushes, green trees and the Pacific Ocean in the background. The workout is done voice-over and Ashley cues excellently.

Though I would never count yoga as one of my strength workouts, this yoga workout does have a bodyweight strength element to it. Nothing major but there are some tricep push ups, some challenging core work and she does some of the more strenuous yoga poses that work the lower body.

Power Yoga is 60 minutes long. You start standing at the end of your mat in mountain pose and doing breaths. Swan dive into forward fold. Plank to cobra. Down dog. Child’s pose. Down dog. Raise one leg to 3 legged dog then bring knee to nose. Bring leg through to runners lunge. With chest close to front leg, lift arms off ground and bring them straight to sides, fingertips reaching behind you; first bring one arm forward (side with leg behind you) so that arms are reaching straight in opposite directions then bring the other arm forward and rise to crescent pose. Lower one hand to floor (same side as back leg), reach other arm to sky; rotate arm in back stroke then front stroke. Return to plank, cobra, down dog and repeat crescent series on other side of body. Repeat crescent series faster, this time omitting the backstroke arms. After final cobra and down dog, return to crescent pose. While in crescent, place arms in eagle pose and extend arms overhead while arching back. End with plank, cobra and down dog. Forward fold. You will remain in forward fold for a while, pulling the chest to thighs. Stand and do neck rolls. Next you will do “breath of fire” while in chair pose; this is fast, even breaths that pump the navel in and out. Swan dive to forward fold to down dog. 3 legged dog to warrior 1; alternate warrior 1 with leaning forward so that chest touches front leg with arms straight beside you, fingertips to back of room. Runners lunge to warrior 3. Plank, cobra, down dog. Do warrior 1/warrior 3 series on other side of body. Tricep push ups. Cobra. Down dog. Forward fold. Next you will raise up onto toes and squat down (while still on toes); start with fingertips on floor and straighten torso, raising arms overhead (so you are balancing on your toes only, bottom resting on heels, torso straight and arms overhead). Core series: start in half boat pose; lower to banana (legs/feet/shoulders a few inches off ground) then raise to half boat but only bend one leg, leave the other straight. Lay on back, legs raised and knees bent, hands behind head; do a bicycle maneuver–straighten one leg while reaching same side elbow to opposite knee (the one still bent), then straightening the arm to the outside of that bent leg. Remain on back with knees bent but cross ankles, knees wide, hands behind head; bring elbow to same side knee, return to center and lift chest and hips higher and release; alternate sides. Remain on back but raise straight legs to ceiling; raise and lower hips. This completed the core work. Come to hands and knees. Cat & cow. Lower chest and chin to ground while butt stays raised (8 parts bowing pose), press up and back into child’s pose then into down dog. Forward fold. Chair pose. Plank. Cobra. Down dog. 3 legged dog to warrior 1. Lower hands behind back and interlace fingers; fold forward so that chest is lower than front thigh, raising laced fingers to ceiling  behind you. Return to warrior 1, plank, cobra, down dog, repeat on other side. Side plank. Tricep push ups. Cobra. Down dog. 3 legged dog to right angle pose. Warrior 2. Reverse warrior. Wide leg forward fold. Warrior 2. Reverse warrior. Right angle. Plank to cobra to down dog. Lay on back. Bridge pose. Wheel pose. While on back, do spinal twist/stretch. Corpse pose. End sitting cross-legged.

One thought on “Element: Power Yoga”