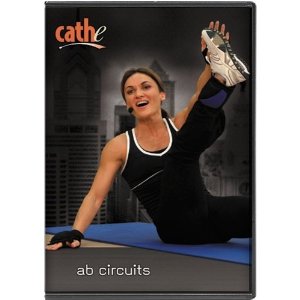 #1 Yoga-Based Abs is 15 minutes long. This is an interesting workout that I have mixed feelings about. I liked it and didn’t like it at the same time—at least initially. I didn’t think I was crazy about it as a core workout until my core was sore later that day. While doing it, I felt there was too much “yoga”—it is a core workout after all. I like yoga, btw, and I like all of the yoga moves she included, but I was expecting more core, less yoga. But clearly it hit my core harder than I thought. Just as background, I am not new to core work. I’ve always worked my core and over the past 90 days I’ve been working it via Xtrain. I think one of the reasons this workout was more effective than I first assumed was how slow some of the exercises are done. It takes more effort to hold some of these poses for a long time.

On to the review. The first move was variations on boat pose. Next was levitation while sitting cross-legged (holding your body off the ground with your hands). Then she does an advanced levitation if your able, with your legs extended in front of you. I was not able, btw. Next you do reverse plank, isometric crunches, a slow bike maneuver, spinal twists (or windshield wiper move), cat/cow, plank to side plank to crocodile to updog, child’s pose.

#2 Pilates-Based Abs 19 minutes. I really liked this ab workout; it combines solid core work with some nice stretching. Pilates is always a great core workout and this one is no exception. Cathe also keeps you from getting too fatigued during the workout by frequently letting you “rest” your core by pulling your knees to your chest.

You start with the basic pilates 100

Roll up and down

#3 Weights and Plates Abs 19 minutes long. I did not do these ab workouts in order. Weights and Plates was the last of the 6 I did and I have to say, I saved the best and hardest for last. Wow. This core workout was very intense and difficult. And for this workout in particular, I want to stress the word “core” because I think it works the whole core area–front to back–better than any of the others. The “weights” in this workout are ankle weights and weighted gloves or wrist weights. Cathe uses two 2.5 pound ankle weights and two 2 pound weight gloves. I used the same thing. The plates are either paper plates or Slide N Glide disks. You start out with the weights on your hands and ankles.

Sit up with two jabs at the top

Torso twists–first lift one leg, then the other, then both legs

Hip lifts–first straight up, then swiveling hips to one side while lifting, then to the other side

Lying supine with legs straight and one arm out to the side, lift the other arm and the opposite leg and touch them

Remove the weights and get the plates; the next section could also (ominously) be called the Plank section since for the entire plate segment you will be in plank. Get into plank with feet/toes on plates for the rest of the following exercises:

Pike pull ins–in low plank (on elbows) slide your feet in, legs straight and butt going straight up into the air

The workout ends with some wrist stretches.

#4 Stability Ball Abs 20 minutes long. This one was a pretty good core workout. I liked it but I didn’t love it. It was kind of hit and miss with me. It had parts that I really liked and parts I didn’t like at all. It makes me feel like a wimp, because the parts I do not like are the extremely advanced parts. I have encountered them on a few of Cathe’s other workouts and I have a problem doing them. Not only because they are so advanced but I have serious balance issues with the stability ball. The moves I had a problem with are the final ones in prone and pike position with feet on the ball. Some of them I had no problem with, but when balance was required, the ball rolls away from me and I end up on the ground. The end result is the few seconds I start the move I seriously feel it, but then then ball escapes and I spend the rest of the move trying to get into position again. So in the end, I feel like I don’t get the benefit of the prone/pike exercises at all.

The workout starts with you laying on the ball. You do crunches with your arms over your head and then in a chest fly move. Move to the mat and, holding the ball in your hands, sit up while lifting one leg and extend the ball to the leg that is lifting. Rolls ups with ball in hands over head. Seated twists–twisting ball from side to side. Ball exchange–raising upper body (holding the ball overhead) and legs at the same time and taking the ball with your feet/legs and lowering, then raising again and grabbing the ball from between feet/legs. Side bends on ball–you do this one by a wall to keep from sliding (press one foot against wall), lay on side over ball and raise and lower upper body. Reverse hyper-extensions–lay prone on ball and lean upper body forward (hands braced on floor and legs up and straight) and raise and lower legs. Rocking–lay on the ball so chin and hands rest on ball and rock side to side, stopping yourself with obliques before elbow touches the ground. Roll outs–face ball on knees with sides of hands on top of ball, roll out using hand/arm/core strength and roll back in.

Here is where it starts getting crazy, though the first exercise is no problem. All of the remaining exercises will be in prone position with different areas of your lower body on the ball and your hands on the ground. Prone knee pull ins–thighs on ball, roll ball in and out toward body. Prone ski twist–roll ball so that knees are resting on ball and rotate legs/knees from side to side. Prone knee twists–similar to ski twist except bottom knee pulls while top knee extends out straight to the side. Double leg pike–similar to prone knee pull ins except ball starts at shins and is rolled in so that toes are on ball, legs are straight and butt is up in the air in a pike; you hold this position for a few seconds each rep. Single leg pike–same as double leg pike except when you pull in and hold, one leg is straight up in the air. Yeah. Those last 4 are no joke. I tried all of them but the ball kept rolling out from under me! Very frustrating. I suppose my difficulty with the last 4 exercises is a reflection of my core strength (or lack of) and that I should work on it more. But how do I “work” on it, if the ball keeps rolling away from me?

#5 No Equipment Abs is 17.5 minutes long and tough. The lack of equipment doesn’t stop Cathe from hitting the abs so very hard. You start with a series of crunches, first with legs bent then with legs straight and reaching for feet. The next exercise was quite painful; with legs in an “L” you pulse up–wow! I felt this one. You do each side twice and I was ready for that exercise to be over! Legs go straight up in the air and you reach for your toes–64 times. The next one was interesting and one I wouldn’t expect to feel as much as I did; reverse crunch then tap you feet out 3 times, further each time. Climb the mountain–this is just a slow sit up where you parody climbing a rope to the count of 4 till your at the top, then “slide” down. Now she moves to obliques. Lying on your back with knees bent you bend to one side and reach to tap your foot. Immediately roll to your side and side crunch up, working the same obliques as the last exercise. Now you move to your side–or one glute–and with legs straight and to an angle, lift both legs toward upper body. Stay in the same position, but this time pull the knees to the upper body.

#6 Medicine Ball Abs is 10 minutes long and actually goes straight into the bonus with a partner. But obviously if you do not have a partner, you stop it at 10 minutes. The Bonus Medicine Ball with a Partner Abs is also listed on the menu separately. I really liked this ab workout. Not only was it a good length for an abdominal add on but it was varied and functional. A nice of change of pace.

The exercises are a combination of floor and standing exercises. It starts on the floor. Laying supine while holding the medicine ball over your head, crunch up raising the the medicine ball and one leg at the same time. After doing this on each leg you will do the same exercise with both legs. Bring the ball over your head to rest on the floor. Do the scissor motion with your legs, 8 reps with ball on the floor, then you raise the ball and your head up and do 8 reps, then repeat. Next you will do sit ups. Start with ball over head, one leg bent and one straight. When you sit up you lift the straight leg and touch the ball to the shin. Seated rotations–these were not what I expected. Sit up and twist one way, placing the ball on the mat behind you, the twist the other way and grab the ball–so you will really be twisting!

Next come the standing exercises. You start with chops. In plie/sumo, swing the ball down between your thighs then overhead like a kettlebell swing. Do the same thing but diagonally to each side. Then you do twists; holding the ball at waist level twist side to side. Hold the ball overhead and do side to side twists. It ends with circumference circles. With the ball overhead you will rotation your upper body in a circle–overhead, to the side to the floor to the other side and back overhead.