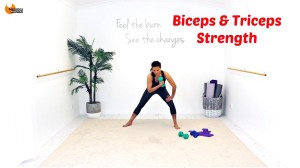 After doing Linda’s Chest & Shoulder Strength workout I knew this was going to hurt. And it didn’t disappoint! This is another high rep/endurance level strength workout that completely burned out my arms. Impossible to lift heavy because you do so many reps. I definitely overestimated what I could lift on some of the exercises and had to drop down to a lighter dumbbell. At the end of the workout, during the stretch, my arms were shaking. So another excellent burnout strength workout from Linda. And, of course, burning my bi’s and tri’s in just this workout wasn’t enough for me. I finished it off with her 100 Rep Challenge Biceps & Triceps. So yeah, my arms are fried.

Biceps & Triceps Strength is 46 minutes long; 1 minute intro and 4 minute stretch. Equipment: 2 sets of dumbbells (one lighter and one heavier) and a resistance band. Linda used 3 and 8 pound dumbbells and I used 3-15 pound dumbbells. What is listed in the breakdown below is what I used.

For more info on Barlates and other (free) streaming workouts I’ve sampled and reviewed, check out my Streaming page.