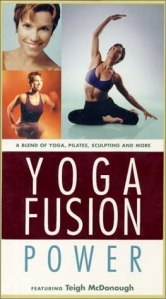 This is a particularly odd workout review so I have to give some background. I have some favorite workouts that I initially did on VHS and were eventually released on DVD. But two of my favorites never ended up on DVD. This workout: Yoga Fusion Power, and its sister workout Yoga Fusion Strength & Sculpt. I have had these 2 VHS workouts on my Amazon wishlist forever, waiting for them to one day appear on DVD. As of today, they still haven’t but then I got an idea. I have numerous old VHS tapes with video of my kids when they were babies and toddlers but I no longer owned a VHS player. My kids are all grown up and now my oldest daughter is pregnant. I felt I needed to be able to view and share these videos with my daughter. So I purchased a used VHS player and a digital converter. Why not also use it on my favorite workouts? So I did! Sure, I could plug that VHS player into my workout TV but why bother for only 2 workouts when I stream so many workouts already?

That’s the background. So, I am reviewing a workout that probably isn’t available to a lot of people. The VHS tapes are actually still available brand new on Amazon. So if you are still able to play VHS workouts, then this review may be of interest. Or maybe you are able to digitally convert it like I did. Regardless, this review is primarily for me. Just like all of the workouts on this blog, I will probably want to return to it one day and when I do, I have the breakdown and my thoughts right here.

I have been thinking about these workouts for a long time. When I did PiYo back in 2014, I loved it but I also knew that even though PiYo was being presented as something new, yoga/pilates fusion workouts had been out there long before Chalene Johnson created PiYo. The Yoga Fusion workouts were stuck in my head and I have been wanting to revisit them ever since doing PiYo 7 years ago. Yoga Fusion Power is led by trainer Teigh McDonough. She calls this a hybrid workout that combines yoga, dance, pilates and qigong. I remember when I did this workout twenty years ago I thought it was so unique and awesome. And it was back then. In 2021, it isn’t so unique, but it is still a wonderful feel good workout. This is a mobility, dynamic flexibility and body weight strength workout. It was challenging but doable for me. I remember when I used to do it a zillion years ago, I found it much more challenging. Weird to think that I am in better shape at 50 than I was at 30 but that’s what what working out consistently for 20 years will do. It was a lot of fun to finally be able to return to this workout. I really enjoyed it and I can see returning to it. Many of Chalene’s PiYo workouts are more advanced than this. Michelle Dozois‘s BodyFit 360 workouts are more advanced than this. So this is more intermediate level but still an excellent and solid fusion workout. I was perspiring but not a lot.

Yoga Fusion Power is 44:30 minutes; 1:40 minute intro. There is a modifier doing easier versions of the exercises. Equipment: fitness mat.

One thought on “Yoga Fusion: Power”