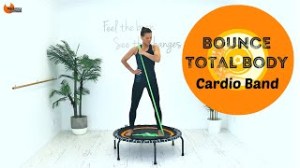 Bounce Total Body: Cardio Band is part of Linda @ Barlates Bounce Total Body Series that was previously only available on DVD. I’m not sure why, but she is now releasing the full workouts for free on YouTube. I have already reviewed the entire Bounce Total Body DVD but I have decided to now post each workout individually for people who were not willing to purchase them. Now you can do the workouts for free. Here is the original post reviewing all 4 workouts on the DVD: Bounce Total Body. They are all cardio + strength workouts done on a rebounder. This is the final workout of the 4 that Linda has released on YouTube. The other 3 are Cardio Barre, Cardio Mat and Cardio Pilates.

Cardio Band is 62:30 minutes; 45 second intro, 2:30 minute warm up and 4:30 minute stretch. Equipment: rebounder and a pilates band/dynaband. You use the pilates band for the warm up. I’m not exactly sure when the warm up ends, but I start the breakdown when the exercises become more aggressive. Here is a trailer for this workout. This was an excellent total body cardio + strength workout. I am so impressed and pleased with it. Linda works your back really well, too, which is always my complaint about some “total body” workouts–the back is skimped on or completely ignored. Not in this one. It is the first muscle group Linda hits and she hits it hard. Of course, how hard it is truly hit all depends on your band strength and how much you choke up on the band. I used 3 bands for this workout. A heavy, a medium and a light strength band. I used the light strength band for all of the cardio. When back was worked I combined the heavy and light band and choked up on it to give me lots of resistance. I used the heavy band for the bicep work (done right after the back work) and for the remainder of the strength exercises I used the medium band. I had some serious muscle burn out during this workout. The cardio was easy to do–nothing complicated–but since you are using the band you feel it more. You are getting arm/shoulder work during the cardio circuits which also helps to elevate your heart rate even more. Another excellent rebounder workout!

For more info on Barlates and other (free) streaming workouts I’ve sampled and reviewed, check out my Streaming page.