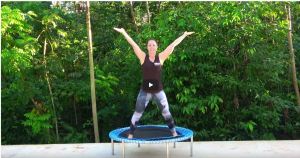 This is another super fun cardio rebounder workout. This is the final workout in the series and it is structured the same as Day 11 and Day 13. It’s longer than the cardio workouts that were uploaded the first 2 weeks, plus they increased the tempo so you are getting a more intense workout. For the week 3 workouts, Claire strings together about 5 different moves. You repeat this short circuit 2 more times, then you move on to the next circuit. There are a total of 4 circuits in this workout. Once you go through all 4 circuits (3 times each) you repeat all of the circuits one more time, once right after the other. Even though it is structured the same, this one felt a bit different than the others. I think that is due to the disco theme. The first half of the workout had a lot of fun disco themed moves. Plus, I really liked the music in this one–more so than the other 8 cardio rebounder workouts in the series. Though there is no dedicated warm up, a warm up really isn’t needed. The workout starts with easier/less intense moves and builds. By the time you hit the 3rd circuit, the intensity of the moves has increased. This was a lot of fun and probably my favorite of the 9 cardio rebounder workouts in their Kickstart Rebounding Series–though I loved all of them. According to my FitBit I burned 194 calories. There is no stretch but I used this on my recovery day, so once I finished this workout I did a long, relaxing yoga stretch.

20 Min Fun Disco Style Workout is 22:49 minutes; 40 second intro, no dedicated warm up and no stretch.

For more info on SanFran Fitness and other (free) streaming workouts I’ve sampled and reviewed, check out my Streaming page.