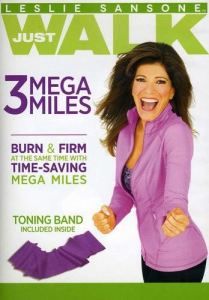 At this year’s library sale, I bought a bunch of Leslie Sansone workouts for $1 each. I love Jessica Smith‘s walking workouts so much, I decided that I should try Leslie’s to compare. And if I like them, I have even more walking workouts to choose from. So I bought 5 of her walking DVDs. 3 Mega Miles is the first one I tried and I have a lot of mixed feelings. First, Leslie’s walking workouts are easier than Jessica’s, so they are perfect for a beginner. I wore a 4 pound weighted vest and 1 pound weighted gloves, but that is my new walking workout attire. I wear it for Jessica’s cardio walks, too. It does help increase intensity. Leslie also doesn’t use arm movements as liberally as Jessica. Jessica usually includes some form of arm movement with every move, which increases the intensity. Leslie didn’t even include a single arm movement until 9 minutes into this workout and then she used arm movements sporadically. However, having done so many of Jessica’s workouts, I know tons of walking arm movements and I inserted them throughout this workout to increase the intensity. With all of my additions, I got a decent steady state cardio workout. I burned 380 calories in 50 minutes. Plus, Leslie uses the band for upper body strength exercises and it actually started burning my shoulders and arms out! So that was a big bonus. I am limited (by my surgeon) to lifting no more than 3 pound dumbbells which really limits how much I can work my upper body. I have found ways to work it anyway through Barlates and Tracy Anderson workouts, but still, my upper body isn’t being worked nearly as well as it normally is. However, Leslie’s band work gave my upper body some very nice work.

Now for the negative. Leslie has a very shrill voice and her laugh is more of a cackle. Incredibly irritating. Plus, she frequently says “walk, walk, walk, walk”–it started grating on my nerves after the first few times. Then there is her chatter. Jessica talks a lot during her workouts, too, but it seems natural plus she is so likable. Leslie’s chatter seems forced, like she searching for something to say to fill the time, which just sounds like inane chatter punctuated with forced cackles. I’m going to try to get through all 5 DVDs but I’m not sure I can stand it. We’ll see.

3 Mega Miles contains a warm up, a cool down/stretch and 3 one mile walks. The workout is designed for you to do 3 miles in one walk which is 50 minutes long (including warm up and cool down/stretch). Or you can just choose to do one or two miles if you want to. It is not programmable but the main menu is chaptered and lists each segment separately.  For Mile 1 you have Leslie plus a whole crew of background walkers. For Mile 2 she only has a 2 person crew and for Mile 3 you just get Leslie–no crew.

The warm up is 2:30 minutes and the cool down/stretch is 6 minutes. You need a resistance band for Miles 2 & 3. You are always marching in place between moves.

Mile 2 is 12 minutes. You need a resistance band for this walk.

Mile 3 is 14 minutes long. It is Leslie only–no background walkers. You need a resistance band for this walk.