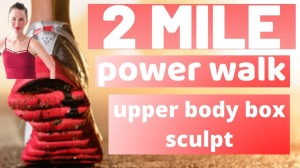 2 Mile Power Walk & Upper Body Box Sculpt is a very basic low impact cardio walking + boxing workout. Angie says this is a high beginner level workout. I think it is appropriate for any level of beginner. It is not an intense workout. I used it as my doubles workout today (second workout of the day) to get in more steps and some additional arm conditioning (for my right arm that is). Angie is wearing 1 pound weighted gloves. I wore a 6 pound weighted vest and held a 2 pound hand weight in my right hand. I am no longer wearing the  on my left side but there isn’t much I can do with my left arm. I am not allowed to hold a hand weight but at least I am free of the sling. I hated wearing that thing. Anyway–nothing super intense but a fun way to get in some extra steps and some arm conditioning if you wear weighted gloves or hold 1-3 pound hand weights. I burned 239 calories, walked 3850 steps and spent 62% of the workout in my cardio zone. By the end my forehead was glistening but I never got sweaty.

For more info on AngieFitnessTV and other (free) streaming workouts I’ve sampled and reviewed, check out my Streaming page.