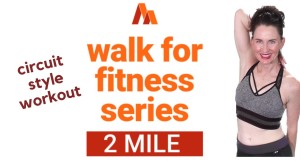 Power Walk 2 Miles Circuit Style is another fun cardio walk with some total body conditioning work from AngieFitnessTV. It is done circuit fashion; you walk a mile, do some conditioning work (while still marching), walk another mile then do some more conditioning work (while still marching). In this one Angie even puts together step combos during the cardio walk portions. She also had some issues with a pet during the second mile and there is some restarts of one of the combos. Kind of funny. As long as you continue marching in place it shouldn’t cause you any issues since it doesn’t last that long. I have noticed in some of Angie’s other workouts she will tell you that you will do something one more time then you do it 2 or 3 or 4 more times. She does that a lot more than usual in this workout. So if she says one more time–don’t believe her! (o:

To increase the intensity of this workout I wore an 8 pound weighted vest, a 10 pound weighted belt and 2.5 pound ankle weights (5 pounds total). Since I can only use one arm (left shoulder surgery), I also wore a 1 pound weighted glove on my right hand and only did the conditioning moves with my right arm. Angie uses light weights for this workout but you can get more out of it if you lift heavier dumbbells. Since I am not using this workout as my actual strength work I just used the same dumbbells as Angie did. I got a great cardio walk. According to my FitBit I burned 400 calories and walked 4943 steps. Another fun workout from Angie!

Power Walk 2 Miles Circuit Style is 56 minutes; 1:15 minute intro; 5 minute warm up and 4:30 minute stretch. Equipment: dumbbells. I also wore a weighted vest, a weighted belt, ankle weights and a weighted glove to increase intensity. The structure of this workout is 23 minutes of cardio walking (including the warm up) followed by upper body conditioning with light dumbbells (Angie recommends 1-4 pound dumbbells, she is using 3 pound hand weights) while still marching in place. This is followed by another 16 minutes of cardio walking. The workout ends with total body conditioning (Angie is using 5 pound dumbbells). I am not breaking down the cardio walk portion but it is made up of your basic march variations, mamba, cha-cha-cha, step out wide then back in, alternating side taps, alternating knee raises, and hamstring curls. She puts these moves together in combos which are actually pretty fun. The second mile is done at a brisker pace and is more intense than the first mile.

For more info on AngieFitnessTV and other (free) streaming workouts I’ve sampled and reviewed, check out my Streaming page.