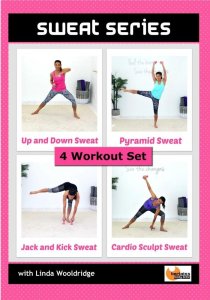 Sweat Series is one of Linda Wooldridge’s newer workout collections (the back of the DVD case says 2017). It contains four approx. 30 minute workouts and none of these workouts are available on YouTube for free–so you have to pay for these! Linda did post clips of each of the workouts and I linked to the clips in the individual reviews below. Other than Jack and Kick Sweat these are all low impact workouts (so 3 of the 4 are low impact). One thing to note about these workouts is that, because they are low impact, the key to intensity and calorie burn is speed and dumbbell weight. Now, Linda has created some pretty complex combos in these workouts that take coordination to do properly and with good form. Because of this, there were times in two of the workouts that I had to sacrifice speed for form. I still did the exercises at the fastest pace I was capable of doing them but with good form, which was sometimes slower than the pace Linda set. But trust me, I worked hard in every one of these workouts. In each review below, I note where/when I ran into this issue. It was never the entire workout, just certain combos within two of the workouts. I was able to match her pace (and maintain good form) in every combo in the other two workouts. Luckily, they are all excellent workouts that I want to return to. Hopefully, the more I do them, the better and faster I get at the executing the combos. These workouts are the perfect length for doubles workouts, so I do plan to revisit them frequently.

In summary, these are some pretty unique, advanced and challenging workouts. They all worked me very hard. I like them all a lot, but my favorite is Pyramid Sweat.

Up and Down Sweat is 29:30 minutes long; 1 minute intro, no actual warm up though Linda says the first combo acts as a warm up, and 2:30 minute stretch. You need one set of light handweights, Linda is using 1kg (2 pounds), I used 3 pound weights. Here is a video clip of this workout. This is a low impact metabolic workout made up of bodyweight combos that you sometimes use the light handweights to increase intensity.  The title refers to the fact that the combos are either standing or done on the floor in plank or beast–you alternate between the two–a standing combo followed by a plank/beast combo. This was tough! I was definitely sweating and working hard! Linda does these combos very fast. I’m not saying that isn’t necessary. For this to be a cardio workout, you have to do these combos at a brisk pace. But sometimes Linda moved so quickly I could not keep up and maintain good form. So I sometimes sacrificed speed for form. But I still got an excellent and intense workout since I was moving as fast as I could, while doing the exercises properly. This is one I’ll have to return to in order to get the flow of the moves. I did like it a lot, even tho it was tough and challenged my coordination sometimes. I could probably have used heavier weights (4 or 5 pounds–not much heavier) to increase intensity, but the first time through I was more concerned with coordination and form.

Pyramid Sweat is 29:30 minutes long; 1 minute intro, no warm up and 4 minute stretch. You need one set of light handweights, Linda is using 1kg (2 pounds). Here is a video clip of this workout. For this workout Linda creates a flowing circuit of exercises. For example, in Grouping 1 below, she shows you all of the exercises in a single combo in which you do each exercise once, each move flowing into the next. You run through this grouping/combo several times to familiarize yourself with it. Then you start adding reps. You add a rep to each exercise as you go through the combo. So in Grouping 1 you do 2 reverse lunges, 2 seesaws w/ knee up and 2 knee pulls in deep lunge. You repeat it again and increase each rep to 3–and so on, and keep going until you do 5 reps of each exercise–then she jacks it up to 16 reps of each exercise. Then you move on to the next grouping. This workout was intense! But it all depends on the weight of your dumbbells–at least for me. I started with 3 pound dumbbells but needed something heavier in Grouping 1 so I grabbed my 5 pound dumbbells and that worked really well for Grouping 1. I kept them for Grouping 2 and holy crap! That push me up into my peak zone on my Fitbit! I kept the 5 pounds and finished Grouping 2 w/out stopping but I was wiped out! Luckily Grouping 3 is lower intensity so I kept my 5 pound dumbbells and that worked. However when you repeat Grouping 2 on the other leg I grabbed the 3 pound dumbbells since the 5 pound dumbbells wiped me out (plus I was really feeling it in my arms by the end). But surprisingly, that lowered the intensity more than I wanted. 3 pound weights were perfect for Grouping 4. Luckily, I have a set of 4 pound weights I never use. So in the future I will use the 4 pound dumbbells for Grouping 2 and that will probably be perfect. I will definitely be returning to this workout. Very intense for a low impact workout. I am noting below what weights I think are appropriate (for myself) for each Grouping below. ***10/12/17 I did this workout + Cardio Sweat Sculpt (below) for my workout this morning. This was a super intense hour long workout. I am adding this update tho because I did some weight changes and they worked very well. I used 4 pound dumbbells for Grouping 2 and it was perfect. For Grouping 3 I used 6 pound dumbbells and that was perfect. Everything else remained the same.***

Jack and Kick Sweat is 32 minutes; 1 intro, no warm up and 2:30 minute stretch. You need one set of light handweights, Linda is using 1kg (2 pounds). Here is a video clip of this workout. This was another tough workout. And like Up and Down Sweat, this workout was made up of complicated combos that Linda does at a brisk pace. As the title states, the combos are jack and kick combos but there are balance moves and all kinds of level changes. Linda really is impressive because I found it impossible to keep the same pace as her on some of the combos and maintain good form–of course, her form remained perfect no matter how fast she executed the combos. So, just like in Up and Down Sweat, I sacrificed speed for form. I didn’t have to do that on all of the combos–but #6, 8, 9 and 11 I did as briskly as I was able–which was slower than Linda did them. BTW–I burned more calories doing this workout than I have in any other Barlates workout. So it worked me hard! I also had to make modifications. First, when I used dumbbells I used 2 pound dumbbells but for the moves where you put your hands on the ground (Linda put her fists on the ground in #8 I guess? Since she keeps holding the 1kg handweights in her palms), it was not comfortable to do them on my knuckles. There is no space between the floor and your hands when you are using such light dumbbells, so I just did the moves sans dumbbells. In the future, I will wear my 2 pound weighted gloves that I use for kickboxing since those leave my palms free. Also, for #9, I used my square step at 8 inches for my hands. The first few times I did the combo, I was able to do it with decent form, but my form deteriorated pretty quickly so I grabbed the step and that fixed my form problem. So the next time I do this workout, I will wear my weighted gloves and have my step set up right away.

Cardio Sculpt Sweat is 28 minutes long; 30 second intro, no warm up and 2 minute stretch. You need one set of light handweights, Linda is using 1kg (2 pounds). You hold your handweights throughout the entire workout. I used 3 pound dumbbells. Here is a video clip of this workout. Other than some low hops (#6) this is a low impact workout. Another very tough and intense workout. Like the others, this is made up of fast paced combos to elevate the heart rate. However, in this one (like Pyramid Sweat), I was able to keep up with Linda’s pace and maintain proper form. There are balance moves in the first part of this workout. If you are seriously balance challenged like me, I recommend having a chair or barre present and using one DB for those. It is always good to work on your balance, so I don’t recommend doing it without good reason but as I’ve mentioned in other reviews, my heels are full of plates and screws and lack range of motion–so I cannot stand on one foot for more than a few seconds. So for the second half of #2 & 4 below, I did the arm motions with one arm/DB and held the back of a chair with the other hand for balance. That is the only part of the workout that has a balance challenge. I still got a great and intense workout. In fact, for that move, I’ll probably use a 5 pound dumbbell in the future. But the 3 pound dumbbells worked fine for everything else.