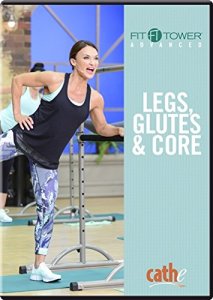 Legs, Glutes & Core is one of Cathe‘s advanced Fit Tower workouts. The only equipment you need for this workout is all of the Fit Tower equipment: the Fit Tower, a flat 6 foot resistance band, a resistance loop (firewalker) and a yoga mat. This workout also includes an 11:30 minute core bonus–this is in addition to the core work that is included in the main workout. The Ab Bonus is also included on the other two Advanced Fit Tower workouts: Total Body and Boot Camp. I only used the Ab Bonus in Total Body since this workout and Bootcamp contain ab work in the actual workouts.

This was a tough workout! You are not going to burn a ton of calories, but you are going to burn out whatever muscle group Cathe decides to torture. Just like any barre workout, this is high rep. You only use the bands on the lower body portion of the workout if you are doing the advanced versions of the exercises. There are 4 exercisers behind Cathe. Jen (at the very back right) shows the more advanced versions of a few of the exercises–so she is the only one using bands during the lower body portion of the workout. Cathe doesn’t even touch the bands until the core segment. In the core segment you only use the 6 foot band. The core segment was long and hard. I am not a fan of long grueling core work, so I didn’t love that part of the workout but it was definitely effective. I felt it throughout my entire core. I did really enjoy how she ended the workout with swimmers to work the back side of your core. My favorite part of course was the lower body barre work. In the future, I will probably only do the premix that does the lower body portion only. This also has an excellent, deep lower body stretch using the tower.

Leg, Glutes & Core is 46 minutes; 5:30 warm up and 6 minute stretch. The workout starts with the tower bar at a level 8 or hip level, and is at the same level after the warm up. This workout has an aggressive warm up–you will burn more calories during the warm up than any other part of this workout! The warm up starts working your legs in barre fashion immediately.

Bonus Abs is 11:30 minutes. I really enjoyed this ab add on. It was not advanced–more intermediate level.