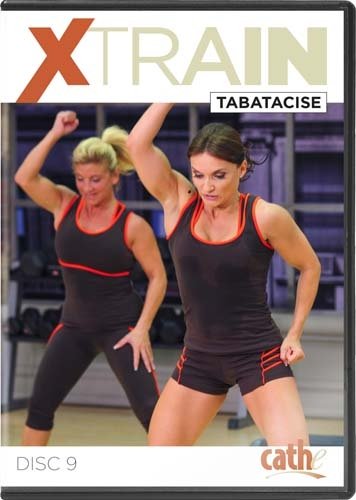 Tabatcise is part of Cathe‘s Xtrain series. For more info on the series as a program see My Intro to Xtrain.

Holy cow! This workout was incredible! Intense! I’ll be honest. When Cathe first posted information about Xtrain many months ago, Tabatacise and the 100 Rep Challenges were what caught my eye. I love tabata/HIITs and the idea of a 100 Rep Challenge was just “new” to me, so I wanted to try it. Well, none of it has disappointed. I thought I was prepared for Tabatacise. After all, I have Insanity and Amy Dixon’s Breathless Body workouts under my belt. I’m not going to go so far as to say Tabatacise puts them to shame—but it is just as tough as those workouts, but different. Tabatacise has the Cathe signature to it, which, IMHO, makes it better.

Let me first define a tabata before we go any further. A tabata is a form of HIIT (high intensity interval training). In a HIIT, you go all out—at your highest intensity possible for a short amount of time (anywhere from 10 to 60 seconds—or in the case of psycho workouts like Insanity—3 minutes!), then recover for anywhere from 10 seconds to 1-2 minutes. A tabata is a HIIT cycle with a specific structure. You go all out for 20 seconds and recover for 10. You do 8 cycles of 20/10—one after the other (a total of 4 minutes)—to complete one tabata. A single tabata is pretty exhausting if done properly (all out effort). Tabatacise contains 5 tabatas.

Tabatacise also deviates from the common thread among most (not all) of the Xtrain workouts—no exercise repetition. The tabatas in Tabatacise are done in the same manner as the tabatas in Crossfire and To the Max. Cathe introduces 4 exercises, then you repeat those 4 exercises to complete one tabata. So there is some repetition, but compared to the way other trainers do tabatas (and there aren’t a lot of them) I prefer Cathe’s method anyway. Tabatacise deviates in another way as well. Between tabatas other trainers let you recover at a low intensity—marching in place or side-to-side, things like that. Not Cathe. Her recovery moves are step combos on an 8 inch step! The choreography is simple, but the moves are not low intensity! Even she states they are “recovery blasts.” I won’t lie, by the time I got to the 5th tabata, I was seriously sucking wind and so ready for the workout to end. That, btw, is AWESOME and exactly the way you want to feel at the end of any good HIIT workout. Completely spent.

I feel it’s important to mention something here to anyone who is suddenly afraid of this workout or the Xtrain program. The workout has premixes so that anyone who is not ready for 5 tabatas in a row can ease themselves into it. You can do 1 tabata, or 2 tabatas, or 3 tabatas, and so on. Also, if you purchased the entire program and are doing a rotation, she always specifies on Tabatacise days to do the premix that works for you. So if you can’t do 5 tabatas in a row, then do a premix that does fewer tabatas. You can work your way up to it.

You will need an 8 inch step for the main workout.

Three jumps and a turn jump

Recovery step blast: side “ups” and lateral jump over step

Bonus Core #1 is 10:30. It is a great core workout. Bonus Core #2 is tougher, but this one is still pretty challenging. You start with full sit ups with speed bag arms. Then you do pulse crunches with hands to knees, then hands behind head. Sit up touching hands to knees, toes, knees and lay back down to mat. You alternate this move with pulse crunches touching hands to knees. Next is frog style crunches (knees to side and bottoms of feet touching). In banana position, twist to the side bringing in knees and touching opposite knee to elbow–alternate (this is a tough move!). In C-sit position with knees bent and feet off ground, do oblique twists. Next is something Cathe calls stacked crunches. What is stacked is your feet. Both legs are extended straight and one heel sits on the opposite toe. As you crunch up, you lift the top leg. Next is full sit ups. The workout ends with a plank series. First, while in straight arm plank, alternate bringing your foot to your hand. Then drop to elbows (low plank) and alternate bringing your knees to your arms. Next is a “jog” while still in low plank–alternating dropping your knees to the mat. The plank series ends by holding low plank. Then she briefly stretches out your core.

Bonus Core #2 is 12:30 and it is tough! WOW! This is a very high rep core workout. You start with some fast paced crunches with legs up and ankles crossed–60 of them! Then you do fast paced reverse crunches–another 60! Then you do crunches called “climb the rope”–64 of those! After that the high reps are mostly over and you do regular reps for the rest of the exercises. But she burns your abs out quick! After the 64 climb the rope crunches you climb the rope to a full sit up then slowly slide down. Next, you revisit one of my favorite unique core exercises from Turbo Barre: while lying on your back, plant one elbow on the ground with the fingers pointing straight up in the air. The other arm lifts up, raising your torso while your other elbow remains planted on the mat. Next you do sit ups where you alternately lift one leg and touch the foot with both hands. Next is another tough move–corkscrew crunches with legs straight up in the air. Then you bend your legs to the side and do oblique crunches. The last core move is side planks. This was tough–especially after working your biceps and triceps so hard in the workout. First you do a lot of basic hip raises in side plank position, but then immediately (no rest) you put the top arm behind your head and you bend forward with the elbow while still in side plank. What I really like about this core workout is that she includes a stretch at the end of it–it is brief but she has you stretch out your core before you the program moves on wherever it is going. (I say this because the “bonuses” are used in premixes–which means something else probably follows.)

100 Rep Challenge Flat Bench Tricep Extensions (7 minutes): As of today, I have now done all of the 100 Rep Challenges. They are awesome and I think they will add a lot to my workout rotations. Coolest idea ever! Tricep extensions are another tough one. Cedi is the crew member who did the exercise, while Cathe gave instructions. You need a bench with 5 risers on each side (14 inches tall) and light dumbbells. It looked like Cedi was using 5 pounds, so that was what I used and 5 pounds worked just fine for this exercise. The object is to do 100 reps; however not straight through w/out breaks. The crew members take various 30 second breaks. Cathe states however you should be able to get to at least 35 reps when you first start or your weight is too heavy. In all of the challenges, the crew members get to 35 reps in the beginning but after 35, their breaks vary drastically. Some only take 2 more breaks (which is about my pace) and others take more. The first time I do the 100 rep challenge I do it the same as the crew member–I use the same weight and take the same breaks. The second time, I do it the way that works best for me. In some, it’s just using a heavier weight and in others it is less breaks (and in some it is both). This one will be less breaks. But that is fine and that is exactly what Cathe instructs. To take breaks as you need them. Here is Cedi’s count: 35 reps. 30 second rest. 10 more reps. 30 second rest. 10 more reps. 30 second rest. 20 more reps. 30 second rest. 12 more reps. 30 second rest. 13 more reps. This equals 100 reps. I definitely don’t need that many breaks. However, my triceps were burning by the time I was in the 90s, so even with the excessive breaks this challenge did the job! That could be partially because I did Burn Sets Bi’s and Tri’s  and had just finished 100 Rep Challenge Bicep curls maybe one minute before I did this challenge. So my arms and triceps were already aching.

100 Rep Challenge Bicep Curls w/ Barbell (7 minutes): I love these 100 rep challenges. My method of using them is to tack them on to the end of a workout that works the same muscle group. I think that is probably how it was intended, too, since the 100 rep challenges for Biceps and Triceps are included on the Bi & Tri workout. All of the 100 Rep Challenges are basically set up the same. Cathe is giving instructions while one other person actually does the 100 reps. There is no warm up or cool down and none of the challenges are included in premixes–so they are yours to play with however you wish. For the bicep challenge, the crew member with Cathe (Marlo) uses a barbell with 25 pounds on it. I used the same. The reps are not done fast–but not super slow either. At a controlled pace. First she does 40 reps and takes a 30 second break. Then 22 more reps, takes another 30 second break. 18 more reps and takes another 30 second break then finishes with the last 20 reps. The first time I did this, I did it at the same pace as Marlo, but in the future I won’t take as many breaks. I think 25 pounds on my barbell was a good place for me to start doing the 100 rep challenge, but I could have powered on longer after the first break (and I will in the future). In the future I will probably only take two 30 second breaks rather than 3. The first time I did this challenge, I did Premix 2 before hand–which is the main Bi’s & Tri’s workout + Bonus Core #2. Then I tacked on the bicep challenge. My arms screaming afterward! I felt as if I had worked them harder than ever! I LOVE IT! The odd thing, however, is that I had no DOMS! I thought that was odd. **The second time I did this challenge was after Burn Sets Bi’s and Tri’s and my biceps were burned out. I used the 25 pound barbell, but Marlo’s breaks worked just fine for me that time! So it apparently depends on how burned out the muscle group is–and Burn Sets really burns those muscles.

Edit: It was pointed out by a reader that the crew members have been filming workouts all day and their muscles are probably already fatigued. This is, of course, true. Cathe mentions in most (if not all) of the 100 Rep Challenges to go at your own pace, which is what the crew members are doing. I noticed myself that when doing the 100 Rep Bicep Challenge that I needed more rests when I did the challenge after Burn Sets Bi’s & Tri’s than after I did the regular Bi’s and Tri’s workout. So Burn Sets burned my biceps out more, which made the challenge more difficult. This is obviously what is going on with some of the crew members—their muscles are burned out.