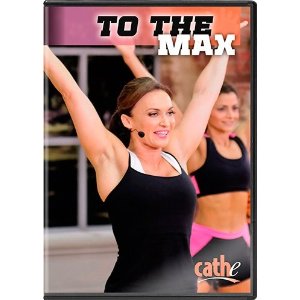 Cathe’s newest To the Max is another super intense workout. Her other new one is Crossfire, which I’ve already reviewed (and is my current favorite cardio workout). To the Max doesn’t displace Crossfire as my favorite, but I do love it. I’m not entirely sure whether it is supposed to be a cardio workout that uses weights to increase intensity or a cardio + strength workout. I will probably use it as a cardio workout; however, my shoulders are feeling it.

I almost didn’t purchase this workout. Many years ago, after hearing that Cathe had the most intense step-cardio workouts out there, I purchased one. I was lost! The choreography was so complex and fast-paced—I really didn’t get a workout at all due to my bumbling confusion. I sold that one back through Amazon post-haste! And never even considered trying another Cathe step workout again. Until I purchased Cardio Supersets. Cardio Supersets includes a bonus step workout. And it was extremely doable. So I decided to give To the Max a whirl, in spite of its step usage. It was getting a lot of great reviews that it was even more intense than Crossfire, which is pretty intense! I’m so glad I did! It is an excellent workout—intense, advanced and non-stop. Also, the step work is pretty basic and athletic. I had no problem with it. There was one change/transition move that caused me problems. It’s done several times and by the last few times I had caught on. The first couple times though I was back to my confused bumbling. Overall, the step part is very intense and very doable.

To the Max is a 55 minute workout. However it comes with “bonus” segments not included in the main workout: Low Impact Slide N Glide Tabata and Bonus Fitness Tabata. Since it was my first time doing the workout and I planned to review it, I wanted to do everything. Luckily, there is a premix (of course! I LOVE Cathe’s premixes!) that includes every segment including the bonuses: To the Max Extreme. So that is what I am reviewing here. The DVD case has every subsection broken down time-wise as well as equipment needed. Equipment needed for the Extreme workout is: a step with 3 risers (that is if you are using a club step with removable risers—otherwise steps at two heights—8 inches and 10 inches), dumbbells: 3, 5, 8 and 10 pounds, Firewalker band and a set of Slide N Glide disks. Just like in Crossfire, each time you change to a new segment the bottom of the screen tells you what the segment is called (yes, they all have names) and what equipment you will need.

About the Slide N Glide disks. So far they have come up in two other Cathe workouts that I’ve done: Crossfire and Cardio Supersets, but I know they are also used in other Cathe workouts that I have hoarded purchased but have not yet done. I initially assumed that the disks were used to make high impact moves low impact, so when I did Crossfire and Cardio Supersets I just did the high impact move. But then I did some research. It appears that on some counts, yes—the disks make a high impact move low impact while not drastically decreasing the intensity of the move. However, it turns out that in some cases, using the disks not only make a move more intense, but also recruits more muscles! So I decided it was time to give the disks a try. Now, they are used in one tabata segment and a few moves in other segments, so I cannot give an across the board review of them. See the review of the Slide N Glide Tabata section for more.

To the Max Extreme is 63 minutes long; 6 minute warm up, 51 minute training period and 6 minute stretch. After the warm up, the first segment is the Solid Step workout. It is done on an 8 inch step and it is a “solid” step cardio workout, as labeled. Lots of basic athletic moves. This is where the confusing change step is, but other than that there was no confusion. And that change step is just to transition between moves—not one of the core moves in that segment. The next section is Step Tabata. You need the 8 inch step, and 3 and 5 pound hand weights. This is done tabata format—20 second HIITs with 10 second recovery and 8 of these cycles equals one tabata circuit. Cathe does 4 moves then repeats them. By now, you’re heart is pumping—just in time for the 30/20 HIIT segment! This is a tough segment! You need the 10 inch step, the Firewalker band and the disks. This section had 4 HIIT circuits. One circuit contains two moves that are repeated (so the 30/20 HIIT segment contains 16 HIITs). Each move is done for 30 seconds with 20 seconds of recovery.  The moves using the step are very basic—but tough!

Next is the Low Impact Slide N Glide Tabata. This had 4 moves that were repeated tabata format, all using the disks: jumping jacks, jack push ups, “swimming lunges” and plank mountain climbers. For the jumping jacks, I didn’t really notice the disks incorporating more muscles or making the move more intense. It did make it low impact, but a regular jumping jack is more intense. Push up jacks—I noticed a difference here! The disks definitely made them more intense and difficult, and recruited more lower body and core muscles. The swimming lunges with the disks was a low impact move. In the past, I have substituted 180 jump lunges for this move which is much more intense. I didn’t feel like the disk lunges were super intense with the disks. And finally plank mountain climbers—just like the jack push ups I felt more muscles recruited. I don’t know that they were any harder than a regular plank mountain climber, but they were different and intense. I will keep using the disks for moves that I see a difference. If I can make it more intense though, I will just substitute a non-disk move.

Next was compound leg work. Here is one of the two sections where it was more strength work than cardio—though it is made up of compound moves at a brisk pace (metabolic weight training). So after all that tabata and HIITs, your heart rate remains high. You use the 10 inch step and 8 pound weights. It has two moves that are repeated. You start on the step, squat off with one leg and lift up doing an abduction with a clean and press. You do each side of the body, then you move on to the second move which is moving plie squats holding the weights stationary that transitions into stationary plie squats with Arnold presses. You do that combo twice; then repeat all of the moves.

Next is another tabata! Fitness Tabata this time. Four moves, each repeated to the 20/10 count. You need the 10 inch step, 8 pound weights and slide disks. The last segment is core with upper body focus. You need a mat and all of the weights. Again, this seemed very much a strength section and I think this section in particular is the culprit for my sore shoulders. The moves included chest fly sit ups, a side plank with a weighted snatch and a sit up with an overhead press.

Then on to a nice stretch. I LOVE this workout. I was drained at the end of it. It worked me hard. There are 13 premixes! So you can do this anyway you want! Cut out just about any segment you want or make it any length you want. I adore Cathe’s premixes.

Premixes (all premixes contain cool down and stretch):