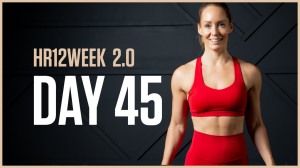 No Repeats Full Body HIIT Workout is Day 45 in Heather Robertson‘s 12 Week Program. This is another intense metabolic strength workout. This one is cardio + strength but there is no set pattern to how the cardio and the strength exercises are alternated. The strength exercises are primarily metabolic exercises that work multiple muscle groups in a single exercise. This will really elevate your heart rate. Finally, the interval lengths (45/15) also increase the intensity. I was working hard! Like many of Heather’s “full body” workouts, I did not feel this was full body, so I used her short The Best Exercises to Target Back Fat as a finisher. Between the two workouts I burned 465 calories!

The exercises are all done interval style: 45 seconds of work followed by 15 seconds of recovery. There is a timer in the lower right hand corner of the screen counting down the intervals and recoveries. During the recovery Heather previews the next exercise. Heather shows a low impact variation for some of the exercises that have impact.

No Repeats Full Body HIIT Workout is 42:29 minutes; 4 minute warm up and 5 minute stretch. Equipment: dumbbells and fitness mat. Heather is using 5, 10, 15 and 25 pound dumbbells. The weights I used are listed below.

For more info on Heather Robertson’s workouts and other (free) streaming workouts I’ve sampled and reviewed, check out my Streaming page.