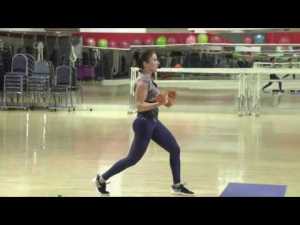 #292 Low Impact Cardio Muscle is another awesome total body metabolic strength workout from Cathe Live. This one is a cardio + strength workout in which Cathe alternates several compound strength exercises with a cardio exercise. Though the title says the workout is low impact that is just Cathe-speak for no plyometrics. True it is not high impact but there is jumping all through this workout–even in some of the strength work. Sometimes Cathe shows a no impact modification and sometimes she doesn’t. Luckily I do not need low impact so the hopping in this workout didn’t bother me at all. I actually loved this workout. This isn’t one of her killer workouts but it is a lot of fun and it worked me well. I also loved how she managed to hit every muscle group in the body. Plus, unlike a lot of her other live workouts, she gives you a decent stretch. So you are getting it all in this workout!

A little aside about this workout. In Cathe’s live workouts with a class behind her she will stop exercising sometimes and walk around the room, sometimes starting up the exercise again next to a class member or sometimes just cheering them on (never to correct improper form tho, which drives me insane). She currently does not have a class due to the pandemic but she still sometimes stops the exercise to cheer you, the home exerciser, on. It’s pretty funny and cute when she does it and she always tells you not to stop so you never mistake it for the exercise being over. When she rejoins the exercise she somehow always manages to keep the count and the the tempo of the exercise, so as long as you are staying on count and tempo, she is right there with you. Except in this workout! This workout is the first time she has rejoined an exercise and been on the wrong lead. #13 below–it was okay because she was still on tempo but it was a little weird because when she rejoined the exercise I felt like I was on the wrong lead–but it wasn’t me, it was her!

Low Impact Cardio Muscle is 48:30 minutes; 5:30 minute warm up and 3:30 minute stretch. Equipment: various dumbbells and a fitness mat. I used the same weight as Cathe did unless otherwise noted below.