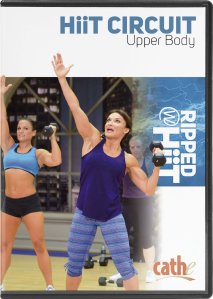 For more information on Cathe’s Ripped with HIIT program see the overview post. (Also, these reviews are being posted out of order–this was the first workout I did after receiving the series, but it is the last one that will post–that is why they read a little “off.”)

It arrived! It finally arrived! Cathe‘s new series/program Ripped with HIIT. I won’t go into too much detail about the series/program since that is covered in a separate post, but this is the first workout I’ve done from the series, so I am pretty excited!

HIIT Upper Body Circuit is a cardio + strength workout; the cardio is HIIT level cardio and the strength is primarily upper body strength work that is very metabolic for the most part. It is a high intensity, fast paced workout that had me drenched in sweat. And for an upper body workout it left my legs feeling pretty fried a few times! But that was due to the HIITs. I loved this workout.  With this series/program Cathe is delivering exactly what I am looking for in a workout–the best of both worlds–HIIT and strength all wrapped up in one tough but fun package.

The workout is set up circuit fashion  as the title suggests, alternating strength work with cardio blasts. The first time I did it, I did the premix that added Abs #1 on the end. Here is my one problem with this DVD (all of the Ripped w/ HIIT workouts have this issue actually). The premix left off the stretch. So even tho the premix says it is 49 minutes (and it is) that is not including the stretch. I had to go to the chapter breakdown to do the stretch which actually made the workout/premix 56 minutes. The second time I did this workout I did premix 5 which was awesome. At the end of each round abdominal exercises are added. By the end of the workout you will have done Bonus Abs #1 and Bonus Abs #2 in their entirety. However, just like the other premix I did, the stretch was omitted from the end, so I had to go into the chaptering to add it on myself making the workout 67 minutes long.

Now, the first time I did the workout, I used the same dumbbell weights as Cathe and I found about half of them too light. I am not posting this review until I have done the workout 3 times; the second time I did the workout I increased the weights and that still wasn’t enough, tho I did feel like I got better strength work. The third time I did this workout I had gone even heavier and found it much more intense. I am posting this after doing it 3 times, but I have to note I still had a more up arrows! So I can go a lot heavier than I think I can–every time I do it I increase the weights and get an even better workout. I love so many of these new workouts that I am not sure which is my favorite–but this is definitely in the lead.

HIIT Upper Body Circuit is 46 minutes long with a 5 minute warm up, 34 minute training time and 7 minute stretch. All you need is various sets of dumbbells. (Update***Listed below are the weights I used the most recent time I did this workout.)

All of the Ripped with HIIT workouts included two Bonus Ab workouts:

Premix #1: All Blast Premix: only the blasts from the main workout. 22 minutes